A land title is an official record of who owns a piece of land. It can also include information about mortgages, covenants, caveats and easements. Part of the documents that can be used to purport/affirm ownership of a land in Nigeria includes

From the list of documents above, the only valid documents tenable as evidence of ownership of land are the last 3, except Purchase receipt. Anyone can issue a receipt for anything. A receipt can be issued for stolen goods or any asset, which the issuer may not even own or have alienable right. Hence, a receipt over land is not an evidence of ownership.

Whenever one goes to the lands registry in Nigeria to conduct a search, such one is looking for either

Where any of the above documents are not available and a client shows interest in acquiring a land, further investigation needs to be conducted and due diligence needs to be taken. (This would be taken care of in the next article on buying land without a registered title)

TRADITIONAL LAND TENURE SYSTEM IN NIGERIA BEFORE LAND USE DECREE 1978

Before the Land-Use Act in 1978 was enacted, Traditional families who had so much land power under their control, benefited from taking pleasure over all the rights given to them as land owners. Because of
this mega-power they wielded with land, they gave out lands to individuals under a tenancy system for them to use the land, either for fishing or farming, while they still maintained control over the portion of the land given to the individuals. Examples are Oniru family, Odofin Family for Agungi up to Northern Foreshore, Ikate Eleguishi for Ikate Land etc as practiced before 1978.

LAND USE DECREE ON THE 28TH OF MARCH, 1978 AND CERTIFICATE OF OCCUPANCY

The activities of these traditional rulers eventually led to the birth of land
speculation in Nigeria, because lands were very expensive to purchase and difficult to obtain. Because of this and ancillary reasons, it finally led to the promulgation of the Land Use Decree on the 28th of March, 1978 that vested all lands in every state of the Federation under the control of the State Governors. People could now directly obtain land from the Governor and the
Governor can allocate land to the individuals or Companies inquiring about land and issue certificate of occupancy to these people it has allocated land to.

That is why in today’s Land transactions, we must commence from the lands registry or ministry of land and conclude at the land’s registry. The state Governor owns the land in perpetuity and can only assign for 99 years through the Certificate of Occupancy.

The Acquisition of land from the Family by the Governor who is now the custodian of all lands in the state was now empowered by the Land Use Act to take the general control and management of all URBAN land and any area designated as an Urban area by the Governor shall be published in an
Official Government Record book known as the Gazette.

We have been hearing ‘excision this, excision that’. How many people know what excision means?

Excision means basically taking part from a whole and that part that has been excised, will be recorded and documented in the official government gazette of that state

Excised lands are those acquired by the government, gazetted and may be given to some communities or village heads to hold and administer, with alienable rights.

Hence we have the following description for land in Nigeria

WHAT IS A GAZZETTE

Gazette is an Official record book where all special government details are spelt out, detailed and recorded. There are different kinds of Gazettes, but for this article we would focus on Special Gazettes that deal with Land purposes only and its features.

A gazette will show the communities or villages that have been granted excision and the number of acres or hectares of land that the government has given to them. It is within those excised acres or hectares that the traditional family is entitled to sell to the public and not anything outside those hectares or acres of land given or excised to them. If they decide to sell anything outside the excised land, then that land may fall under acquisition by the government and such transaction is subject to approval by the government

HOW TO DETERMINE LAND STATUS IN TERMS OF EXCISION AND GAZETTE.

The best way to go about this is to engage the services of a professional in dealing with land matters. (An Estate Surveyor and Valuer). The surveyor is to investigate the site at the Office of the Surveyor General in Ikeja, for a Lagos state land. This can be done through obtaining Land Information or charting information.   All necessary details would be given at the office of the surveyor general.

The essence of the due diligence is to avoid being swindled into buying a land that belongs to the government from an individual, who has no power or authority to sell.

In conclusion, practical real life experiences would be given, having dealt with land under the control of the Lagos State Government.

The first case study is centred on a land within a village known as Itomu Village, under Ibeju Lekki Local government area of Lagos State. We were engaged to provide a valuation service, hence we needed all necessary information, before providing a value to the site within the village. This village is separated from Badore in Ajah via the creek, which has caused significant demerit to the land values in itomu, when compared with land values in the area bounded by Badore end.

We accessed the land in less than 30mins from badore via a canoe, navigating over the creek. The alternative access to the land is via Elerangbe axis of Ibeju Lekki, which is a bit far.

Itomu Village was yet to be developed and life in general is fully agrarian, with few completed bungalows noticeable, whilst other small developments were on going.

The village was yet to be served with national electric power supply, as no electric poles were in place, neither were there any sign of water from mains.

We however observed solar system installed by the government to generate electricity supply to the village as well as communal borehole provided. Also individually provided power supply such as generating plants by some community members were sighted

The property in question does not have a strong proof of ownership. The beneficiary of our report, a Limited liability company in Lagos, Nigeria had shown proof of purchase evidence by a purchase receipt in their name. We also have a Survey Plan and a deed of assignment between the bale and principal members of the village and beneficiary of our report. All documents in possession of the beneficiary of our report are not registerable. Why? The village is headed by a Baale (lesser in Position and power than a regular King) and the deed does not in any part thereof in its recital show any evidence that the land/Ito Omu Village has been excised by the Lagos State Government in any official gazette. Hence, the land still remains under Government acquisition and not within any designated village excision and the community is yet to be given either customary/statutory right of occupancy.

WHAT WE KNOW ABOUT THE LAND IN ITOMU VILLAGE

THE IMPLICATION OF BUYING SUCH LAND

Anyone who buys such land would have him/herself to blame, as the land can only be sold by the government, not by an individual or a community or group of persons.

The second case study is centred on a land within Ejinrin Town, under the Epe Divison, Epe Local Government area of Lagos State.

We were engaged to provide a feasibility and viability study by our client, who intended to establish a tank farm in the area.

Unlike the Itomu Village, Ejinrin still has better accessibility and tarred roads. It can be accessed via the Lagos Epe Expressway, through Itokin road.

Although one of the first towns where commercial activities started in Nigeria and Lagos in particular, Ejinrin remained irrelevant and unknown.

Ejinrin has one of the oldest roads, which link Lagos to Kano State. The oldest Anglican   Church, built in 1892 by the Europeans is still standing in the community. All these buildings are still in their original form.

Several multinational companies like United African Company (UAC), Patterson Zochonis, PZ and individuals like Chief Okunowo of Ijebu were said to have started their businesses in Ejinrin. It was the popularity of this ancient community that motivated the Juju musician, Chief Ebenezer Obey, to sing the song, “Bi oko kan o lo Ejinrin, egbegberun e alo” (meaning, if a vessel refuses to sail to Ejinrin, thousands of such vessels will be ready to go).

The neighbourhood cannot be compared with high brow neighbourhoods in the city centres or the main Epe town itself in terms of available services and infrastructures, however, it is worthy of note that there is a General hospital in the neighbourhood, some commercial activities takes place there, coupled with various government primary and secondary schools, good road networks and availability of electricity from the public mains.The village was served with national electric power supply, as there were electric

The property in question measures an area of 7.272 Hectares (72720 square metres) as described on the survey plan. However there is no proof of ownership.  The community/town headed by Oba Rafiu Ishola Babatunde Balogun and other council chiefs possess no title to proof ownership. The Survey Plan is not registerable. Hence, the land still remains under Government acquisition and not within any designated village excision and the community is yet to be given either customary/statutory right of occupancy.

WHAT WE KNOW ABOUT THE LAND IN EJINRIN TOWN

Information available from the Lagos State Government Charting information revealed that this particular property that we are assessing for our client falls within Lagos State Agric Acquisition. In this case, there is no official Gazette and the land is not within any designated village excision.

The project then was a mirage and was subsequently aborted at the conception level, over lack of title.

THE IMPLICATION OF BUYING SUCH LAND

Anyone who buys such land would have him/herself to blame, as the land can only be sold by the government, not by an individual or a community of group of persons.

The land in Ejinrin can only be sold if there is an Excision of the land to the community via a Gazette.

This article is merely an overview in differentiating  land titles on landed properties.  It is not a substitute for such professional advice or services and it should not be acted on or relied upon or used as a basis for any decision or action that may affect you or your business, without consulting a qualified real estate Advisor.

Ademola Ladega  (ANIVS, RSV MNIM, FIMC) is the managing partner of AOL Management Consult (www.aolmanagementconsult.com.ng) He is a highly experienced real estate consultant with field/practical experience spanning over 9 years, having previously worked at Ismail and Partners, where he contributed a great deal to the success of the firm and rose to the position of the Head of Valuation and Senior Associate

Mr Ladega has extensive experience of providing valuation services in Nigeria to large public and private companies in many sectors including utilities, banking, insurance, financial services, agro-industrial, shipping, commercial and trading sectors. As well as experience in reporting in accordance with the regulatory requirements of Nigeria, in full compliance with IFRS, RICS, and IVS 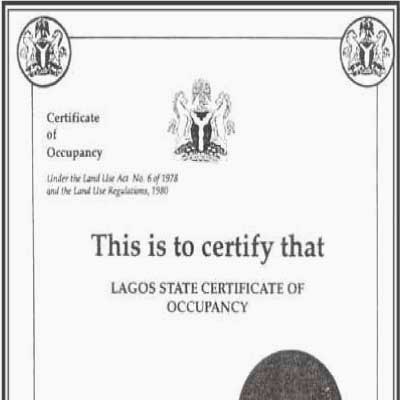 1 thought on “UNDERSTANDING LAND TITLES IN LAGOS, OUTSIDE OF THE KNOWN DOCUMENTS CASE IN POINT EXCISION AND STATE GAZETTE”