In one of our previous articles Land titles, we highlighted some of the titles that cover landed properties/ real estate assets in Nigeria,. In this article, we would be focusing on two of the most popular land tiles most Nigerians are familiar with, either by handling or just hearing about them. We would explain in details what each of the title documents is, what they are not and also share images, as well as describing the differences between these two title documents.

WHAT IS A C of O (CERTIFICATE OF OCCUPANCY?)

A Certificate of Occupancy is an authorization document issued by the State Governor/Government (as the case in Nigeria) to an individual, groups of individuals or an entity conferring the right of occupancy of a particular property clearly defined by its location size and a term of 99 years. 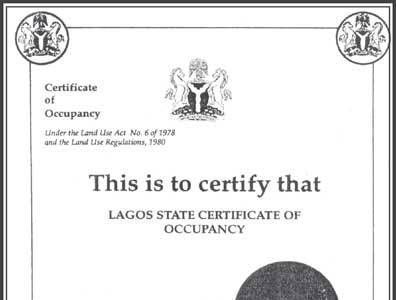 WHO CAN ISSUE A CERTIFICATE OF OCCUPANCY?

The Land Use Act of 1978 unified the land tenure system in Nigeria and empowers by virtue of Section 9(1) the Governor of every state in Nigeria (the Minister of FCT for Abuja) to issue a Certificate of Occupancy under his hand in evidence of a right of occupancy.  Hence, it is important to state that only the serving/incumbent State Governor can issue this certificate having acted in line with Sections 5, 9 and 10 of the Land Use Act of 1978, which confers the power and dominion of state land into the hands of the State governor.

WHO CAN BE ISSUED A CERTIFICATE OF OCCUPANCY?

The Constitution of Nigeria provides that every citizen of Nigeria has a right to acquire and own immovable property in Nigeria. There is no discrimination in terms of sex, name, ethnicity, and religion on issuance of this certificate to any person(s) provided the applicant meets the requirement.  For anyone to be issued with a certificate of occupancy such a person must apply through the lands bureau of the state and proper documentations must be filed, screened, survey plan submitted, before the lands bureau would make recommendations to the Governor to sign the Certificate of Occupancy. Application is not automatic, as applicant must meet requirement before being entitled to the issuance

UNDER WHAT GRANT CAN A CERTIFICATE OF OCCUPANCY BE ISSUED?

ON WHICH LAND CAN A C of O BE ISSUED?

It must be emphasized without equivocation that no land can have two Certificates of Occupancy. If there exist two on a single land, one must be a fake document or issued in error due to deception of the government. We have seen circumstances like this before, which were settled in the court

A certificate of Occupancy after the 1978 Land Use Act should be the first document to be issued on a land that has never been registered at the lands registry, whether developed, brown field or green field. i.e there is no document on the land traceable to the land registry. Such land must be charted at the office of the Surveyor General of the state and Surveyor General of the federation (on federal land) to determine:

If the land is free from acquisition or falls under ratifiable land, the beneficiary of the land/applicant for the Certificate of Occupancy can then apply formally to the state Government, submitting requisite documents, and pay government fees for the issuance of the C of O on the unregistered land.

Note:  C of O would only be issued if there is no record with the land registry about the land and no form of title has ever been issued Land Certificate, Conveyance or C of O on that particular land before the present application.

CAN A C OF O BE VOIDED, REVOKED AND CANCELLED?

WITH A C OF O, AM I THE OWNER OF THE LAND IN PERPETUITY?

It is important to state unequivocally that the concept of ownership of the land in absoluteness does not apply to land in Nigeria anymore since the commencement of the Land Use Act. For you to sell any land from 1978 to date, you require the consent of the Governor of that state. Hence, you do not own the land in perpetuity. In fact what you given is the statutory right to occupy and use subject land the specific use the Governor says you can use the land for. A certificate of occupancy is granted for a term of 99 years and can be renewed if the Governor wishes after expiration. Unlike your car and your other no real estate assets that you can dispose as you so wish without the consent of anyone, the reverse is the case for land, as ownership is vested into the state Governor.

WHAT HAPPENS AFTER 99 YEARS LEASE STATED IN THE C OF O EXPIRES?

This is another question many would have at the back of their minds in view of the fact that the C of O confirms the Governor as the perpetual owner of the land, while the holder of the C of O is an occupier for 99 years only.

Simple answer is that, the incumbent governor at the time of expiration can either renew the lease for another 99 years in consideration for payment or decide not to.

IF I HAVE A DEED OF ASSIGNMENT, DO I STILL NEED TO APPLY FOR A C OF O?

As posited in this article, landed property is different from any other kind of asset that can be alienated at the discretion of the owner. In a case of land, no one can sell land, mortgage, transfer possession, sub-lease, or otherwise without the consent of the Governor. Hence, after selling a land, a deed of assignment is executed between the buyer (assignee) and the seller (assignor). The buyer must now take a step further by registering the assignment for it to be known as Governor’s Consent or registered Deed of Assignment.

In response to the question on whether a C of O is required. A registered Deed of Assignment or Governor’s Consent would most likely derive its title from an existing C of O, through an assignment. Hence, a Certificate of Occupancy will not be issued to a holder of a Governor’s Consent on the same land.

In a situation where your deed of assignment is not registered at the land registry, it is the root of title of the assignor that would determine whether you are to be given a fresh C of O or you would only be required to register the deed of assignment. This is further explained below

WHAT IS GOVERNOR’S CONSENT (REGISTERED DEED OF ASSIGNMENT?)

For education, ‘Governor’s Consent’ is an action by the governor or his appointee consenting to a land transaction on a deed of assignment executed between an assignor and assignee through appending of signature on the executed document. 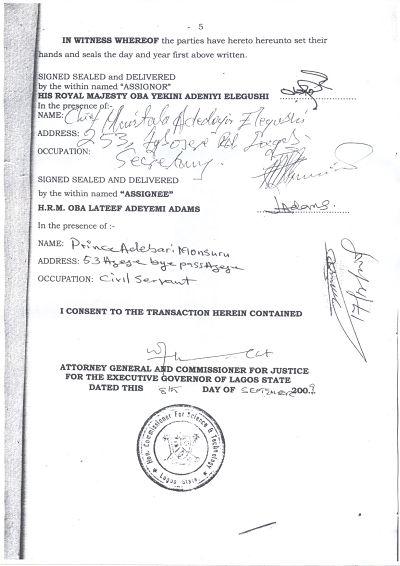 The consent of the Governor appended on the deed of assignment does not confer o n the beneficiary a fresh term, as the C of O does. It only affirms the transaction and the unexpired term stated in the C of O is still maintained.

The below table explains more

This article expresses a personal opinion as well as the view of others  pertaining to some of the challenges in Nigeria’s housing sector, and does not in anyway substitute for such professional advice or services and it should not be acted on or relied upon or used as a basis for any decision or action that may affect you or your business, without consulting a qualified real estate Advisor.

Ademola Ladega  (ANIVS, RSV MNIM, FIMC) is the managing partner of AOL Consult (www.aolmanagementconsult.com.ng) He is a highly experienced real estate consultant with field/practical experience spanning over 9 years, having previously worked at Ismail and Partners, where he contributed a great deal to the success of the firm and rose to the position of the Head of Valuation and Senior Associate

Mr Ladega has extensive experience of providing valuation services in Nigeria to large public and private companies in many sectors including utilities, banking, insurance, financial services, agro-industrial, shipping, commercial and trading sectors. As well as experience in reporting in accordance with the regulatory requirements of Nigeria, in full compliance with ESVARBON Nigeria Valuation Standards (Green Book) 2018 IPSAS, IFRS, RICS,  and IVS